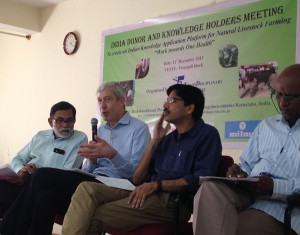 The India donor and knowledge holders meeting
This meeting was held at TransDisciplinary University (TDU) in Bangalore. The participants represented dairy cooperatives such as KMF and MILMA, NGOs such as Oxfam India and Solidaridad, researchers from various universities and policy makers a.o. from Netherlands Embassy in New Delhi. The participants stressed the need for cooperation to advance Natural Livestock Farming in India and the urgent need to reduce antibiotic use in dairy farming.

The meeting was organized by the Centre of Expertise on Natural Livestock Farming from the Netherlands and TDU from India to explore the contribution of Ayurveda and natural livestock farming to One Health. One Health has emerged over the last decade as a key concept guiding international research and policy in the field of emerging infectious diseases such as zoonoses. In its simplest form, One Health refers to integrated approaches as a means to improve human, animal and environmental health. This aligns well with Ayurveda and local health traditions that inspire ethnoveterinary medicine to prevent and cure animal diseases.

One Health
In his keynote speech, dr Unnikrishnan from United Nations University (UNU) shared principles of Ayurveda in the context of One Health. He stated that the Ayurvedic view on ‘One Health’ is based on the holistic perspective of co-evolution and interconnectedness in health and wellbeing between humans, animals and the environment. There are several reasons for the increase of anti-microbial resistance in humans, among them the largely uncontrolled use and sale of antibiotics for animal production. Combined with insufficient quality controls, antibiotics are leading to residues in milk and milk products. It was acknowledged that awareness on anti-microbial resistance is low among the general public. There is a need for more awareness raising and Indian policy makers have to take action to control use and sale of antibiotics for use in dairy farming. The 5-layer strategy of natural livestock farming – improved animal management, strategic use of local breeds, use of medicinal plants, milk quality control and extra payment – was seen as an important to produce safe milk.

Due to the experience and network within both human- and animal health, TDU as an organization is well placed to play a central role as One Health Center within the Indian context.

Indian Platform
The Indian platform will exchange experiences on natural livestock farming and explore links between animal, human and ecosystem health. The meeting agreed to explore the possibility for a Dutch-Indian One Health conference in 2016 at TDU in Bangalore, on natural livestock farming and One Health. A plea was made to continue the Dutch-Indian exchange program of farmers, veterinarians and researchers.